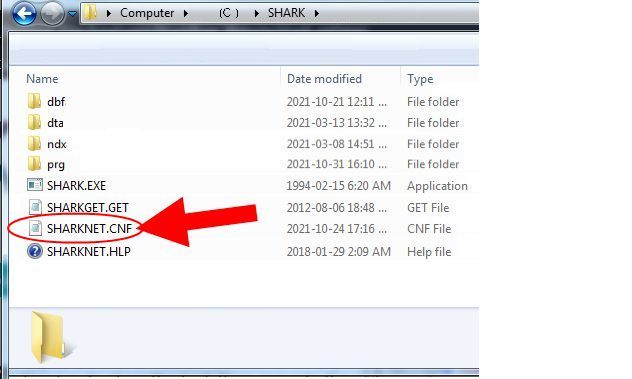 Default system configuration variables are built into Shark. They include the contents of the function keys (F1 - F10), the date and time from DOS, various default values, file locations, and other information.

Default values can be changed by means of the Shark configuration file "SHARKNET.CNF", otherwise referred to as the "CNF" file. SHARKNET.CNF is a simple ASCII text file. Shark reads this file at startup, adjusting Shark's default settings as requested by the CNF file. The CNF file is located in the base SHARK folder.

Shark system variables are distinguished from other variables by having a colon as the first character of its name, e.g. :TIME.

Like memory variables, the values of most system variables, including the function keys, are changeable using the = (equal sign) or STORE...TO commands. Default settings can be changed by editing the SHARKNET.CNF file.

These on-the-fly changes redefine function keys only during the current Shark session. To save changes to function keys or other system variables enter the new definitions in the configuration file, SHARKNET.CNF.

In addition to the function keys, there are a number of other system variables which can be viewed by typing LIST SYSTEM.

The following are sections of a typical Shark configuration file (the "CNF" file):

Shark may be configured to stop and start as you like:

The Function Keys may be configured